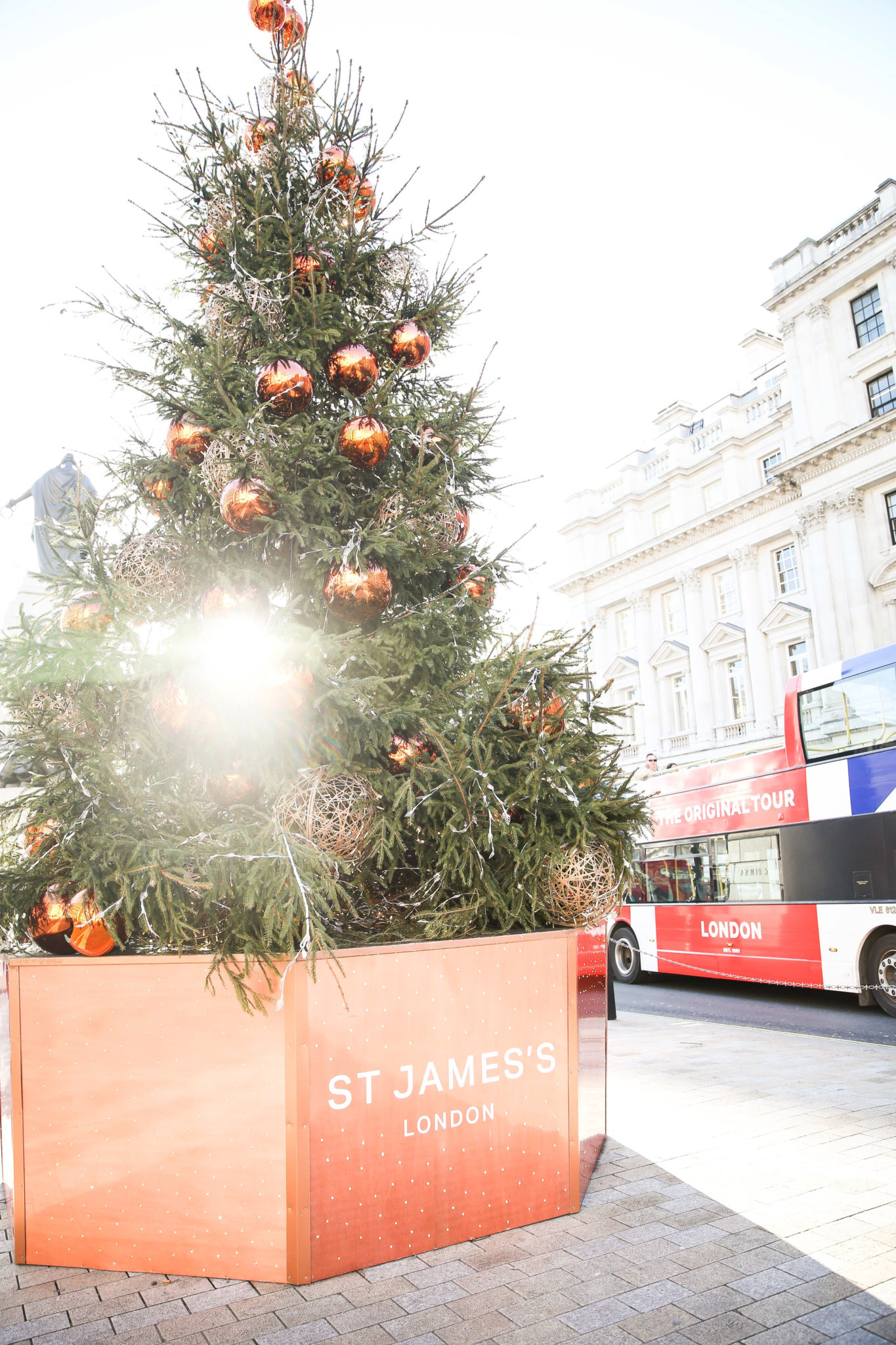 Well, it’s been quite some time since I’ve posted on here, but this time I at least have a good excuse! I was lucky enough to visit my boyfriend, Ryan, in the UK over the holidays where he is currently living and playing hockey in Manchester. For two whole weeks we had an amazing time relaxing (me more than him) and exploring as much of England as we could. Prior to going on my trip, I heard so many wonderful things about England and now I know why- kind people, cozy pubs, all the fish and chips you can eat, historic cities, mulled wine… The list goes on and on!

Of all the cities and villages we visited in England, my favorite by far was London. From the historic buildings and architecture to the Christmas decorations and overall posh atmosphere, it’s safe to say that the entire city stole my heart for so many reasons. Only being able to stay for one day and night with Ryan, I decided to go back a second time with his mom and sisters when they flew in a few days later! Today I’m really excited to finally share this post about the activities and places we got to experience during our time in London, along with a few things I hope to experience next time! 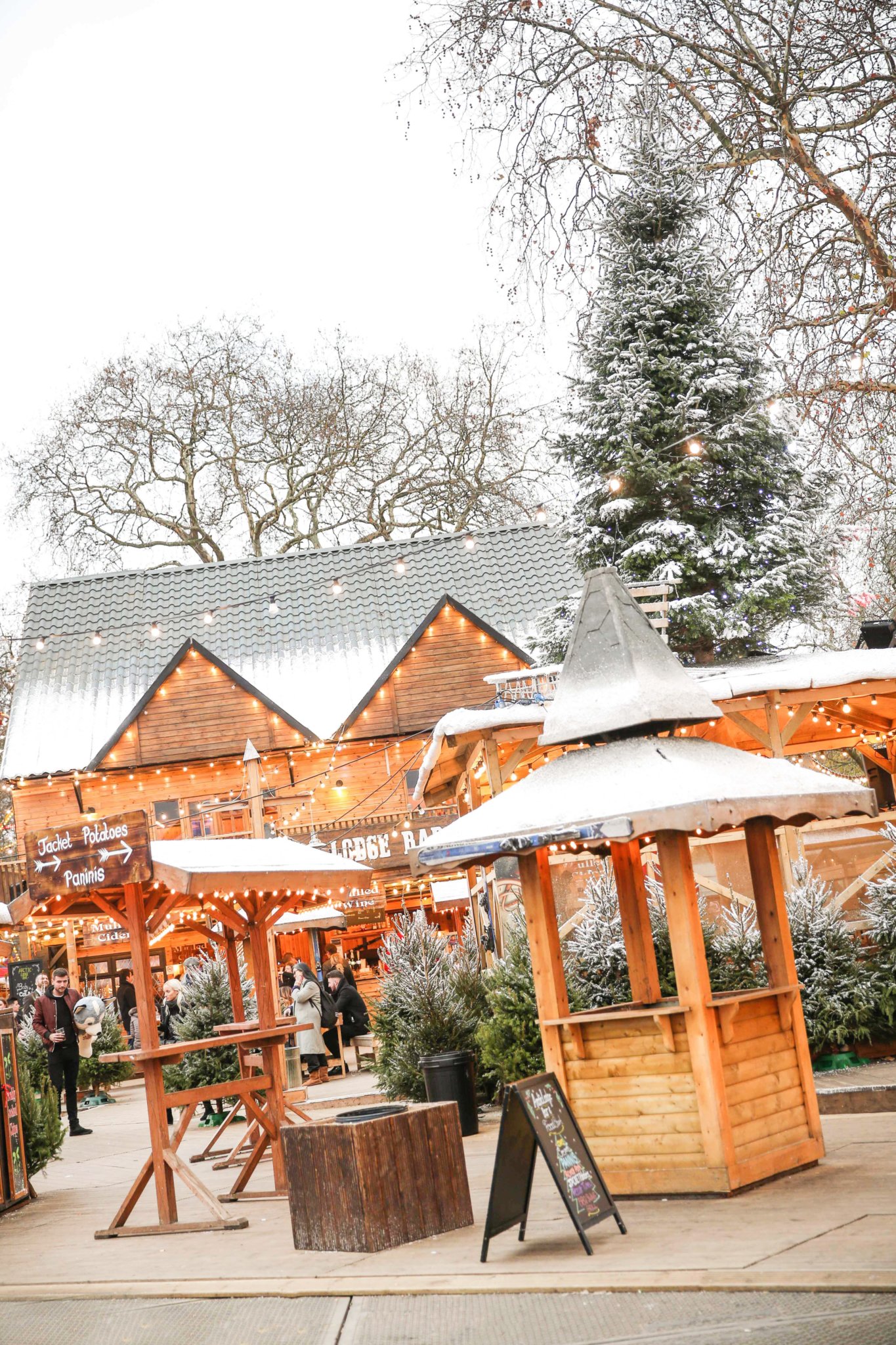 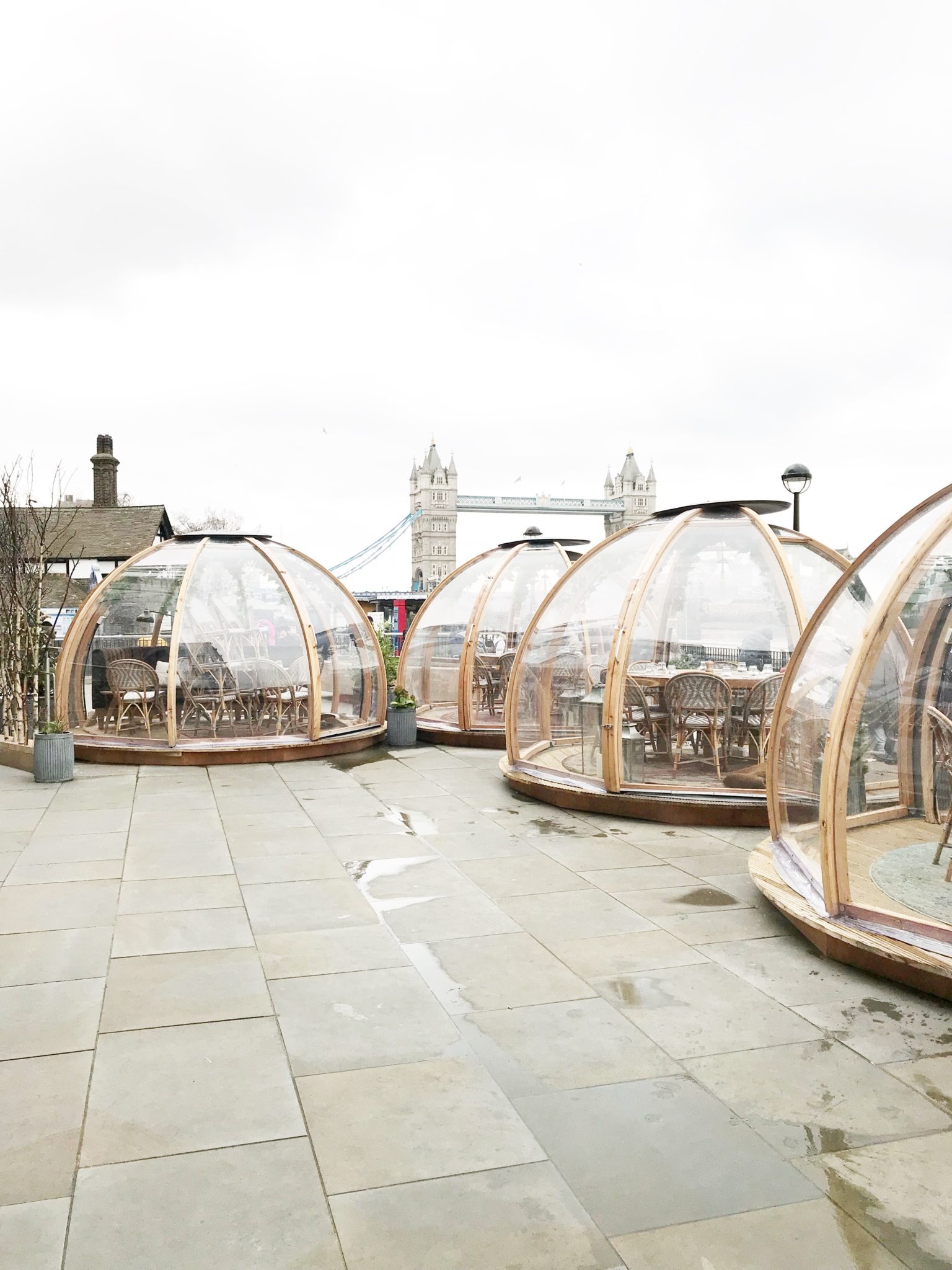 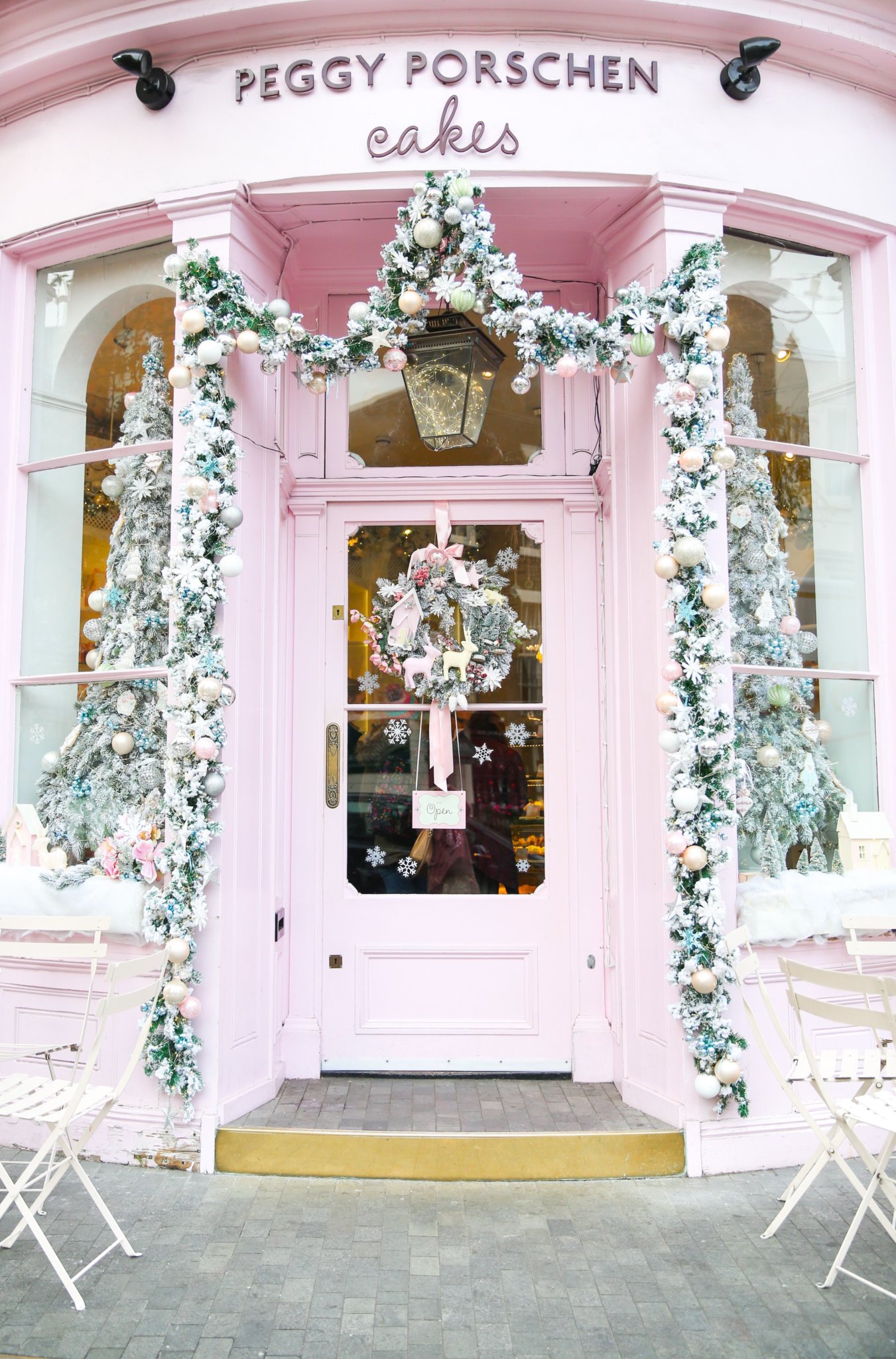 We stayed at Club Quarters St. Pauls which is on the east side of the city. We were literally just across the street from St. Paul’s Cathedral and within a 20 minute walk to River Thames and Tower of London. Whether you stay in west, central or east London, chances are you will be close to a main attraction so it really depends on what you plan on doing during your stay. Club Quarters was great for location and also offered a good room rate considering the holidays, so it worked out well. 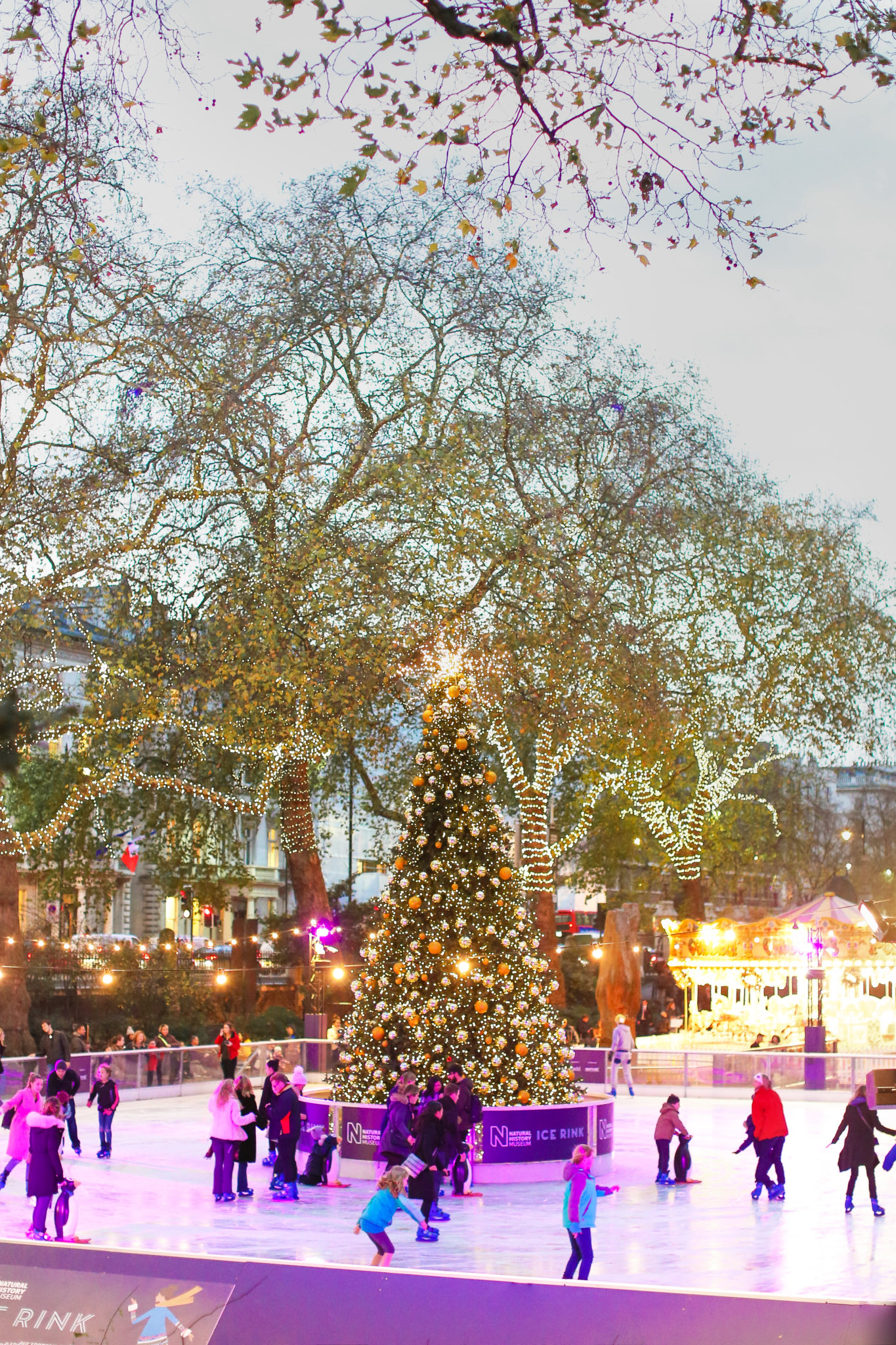 Go ice skating at The Natural History Museum, Somerset House, or Tower of London. There are plenty of ice rinks in London, but I found these three spots to be the prettiest! Most rinks are open mid-fall until the New Year and tickets run anywhere from £12-£16 ($17-$22) for an adult ticket, and children ages 12 and under can get in for roughly £8. You can look on their websites for prices/deals. The Natural History Museum actually has a deal for a parent and toddler for £11 which includes a free drink! We made the mistake of not booking our tickets early, but still made it to Somerset house to watch everyone skate around.

Take The Original Tour (hop-on, hop-off bus). The Original Tour is a sight-seeing bus tour that takes you around the city’s main and historic attractions. When Ryan and I were in the city, we spent a lot of money on Ubers and taxis, getting around the city (the tube is closed on Christmas day). When I went back with his mom, she recommended the original tour as transportation as it makes three different routes and there is over 80 hop-on, hop-off stops. The stops are pretty easy to find throughout the city and a bus comes every fifteen minutes which made it pretty convenient. Tickets are £29 ($40) online.

Visit the Christmas markets + Hyde Park’s Winter Wonderland. From what I’ve found, there are several Christmas markets throughout London but the two that seem to be the most popular are Southbank Center Wintertime Market and Hyde Park’s Winter Wonderland. If rollercoasters, shows and games aren’t your thing, it’s typically still free to walk around and enjoy the atmosphere.

Walk down Regent, Oxford, Carnaby and Piccadilly Street. Take a walk through the most popular (and expensive) shopping district in the UK. If possible, try and spend your time here at night so you can experience the beautiful Christmas lights they decorate the streets with!

Visit St Pancras International. Known as Europe’s ‘Destination Station,’ St Pancras is more than just your typical train station. You can walk around and experience a variety of restaurants, bars, boutiques, services and events. The station will turn 150 years old this year!

Walk through Harrods. Speaking of shopping… If you’ve never heard of Harrods, make sure to put this on top of your London to-do list! Harrods is a famous department store that’s been around since the 19th century and it’s full of luxury stores, services, restaurants, etc. We spent a little over an hour in there, walking around and checking out the different stores they had. It’s a main tourist attraction in London and so worth the walk-through (even if you can’t afford to buy anything).

See a Christmas musical. This is something I would have liked to do if we had more time in London. Musicals are a lot of fun in any city, especially during the holidays! See what Christmas shows are playing in London, here.

Walk some of the prettiest streets in London. If you’re a fan of the film Love Actually, you’ll love St Luke’s Mews and it’s surrounding streets in Notting Hill. There are so many pretty streets tucked away in alleys, and pastel colored homes covered in vines. This is a good activity to do on Christmas day because all streets in London are literally empty and most restaurants/shops are closed. Kensington and Kentish Town are also full of pretty streets and homes!

Go on a historic tour. There is history everywhere you look in London and so many different historic tours you can do. My personal favorite was Tower of London – we spent almost three hours in the tower and still didn’t get to see everything there was to see. Tickets are roughly £22 ($30) for an adult and £10 ($14) for a child, depending on where you purchase.

Experience Hogwarts In The Snow. Since I read about this after I visited London, I’ll have to save this one for next time! You can actually visit Warner Brothers Studio and see iconic sets from Harry Potter decorated for the holidays, along with some of the original props they used in the movies. You can also touch some of the original ‘snow’ they used during production! 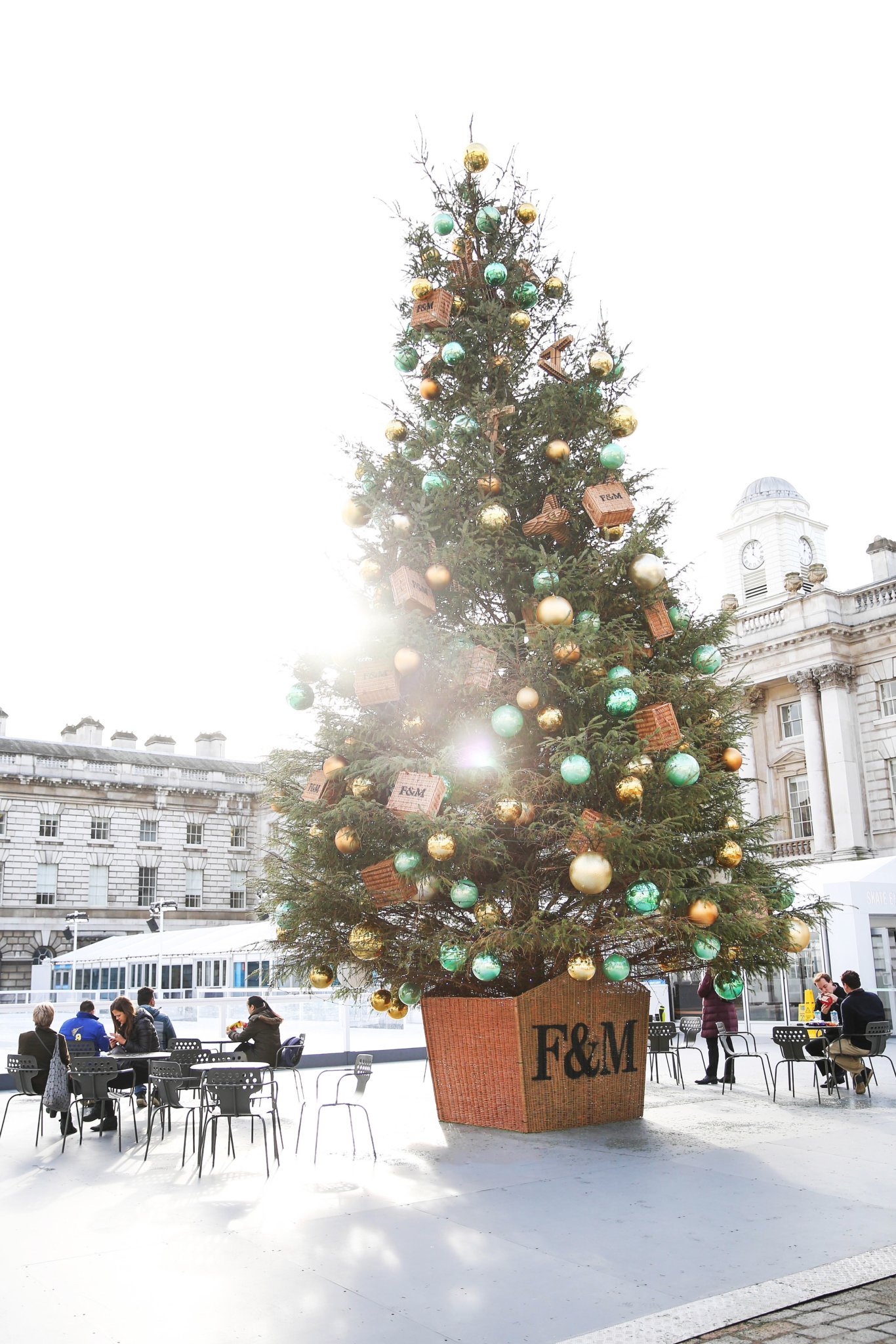 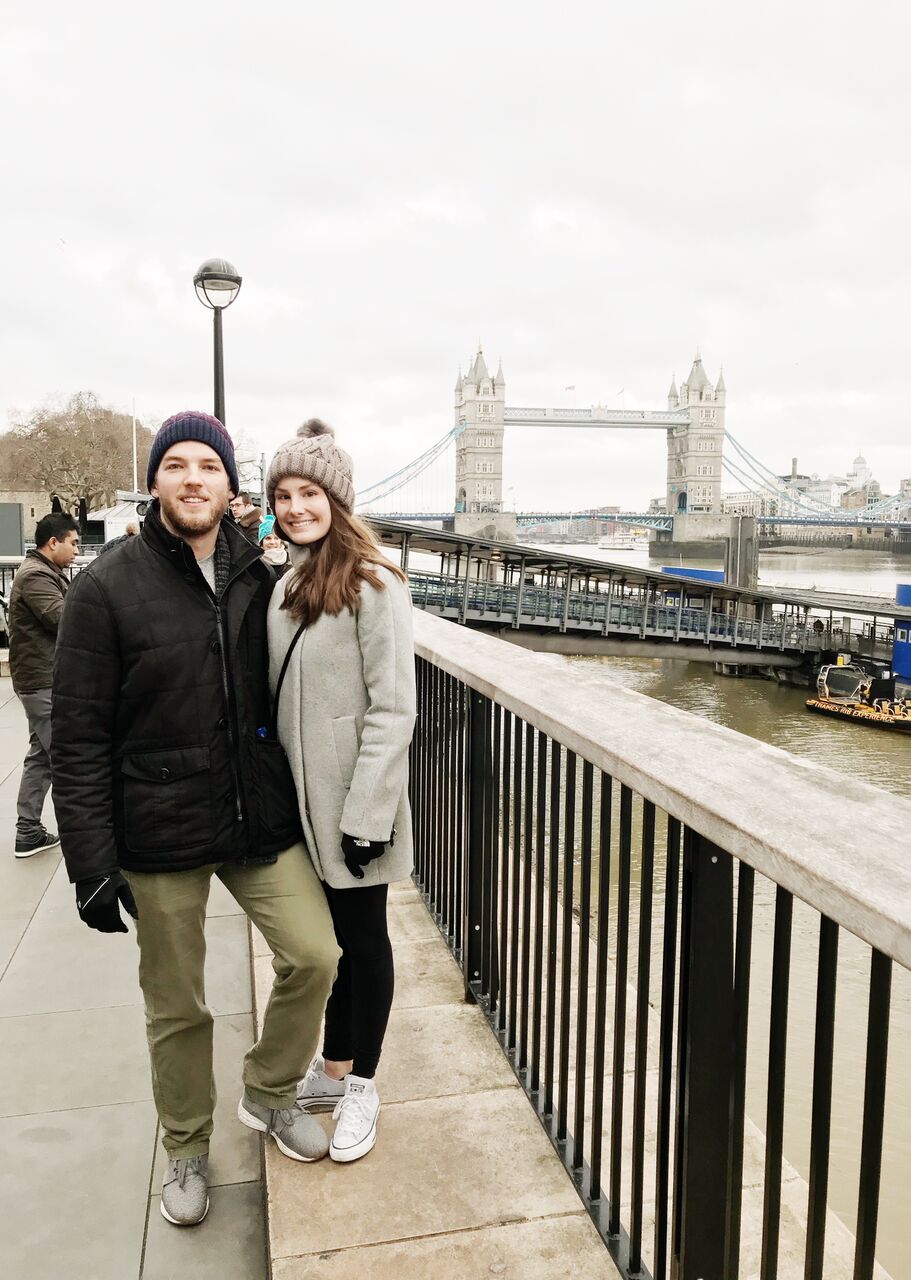 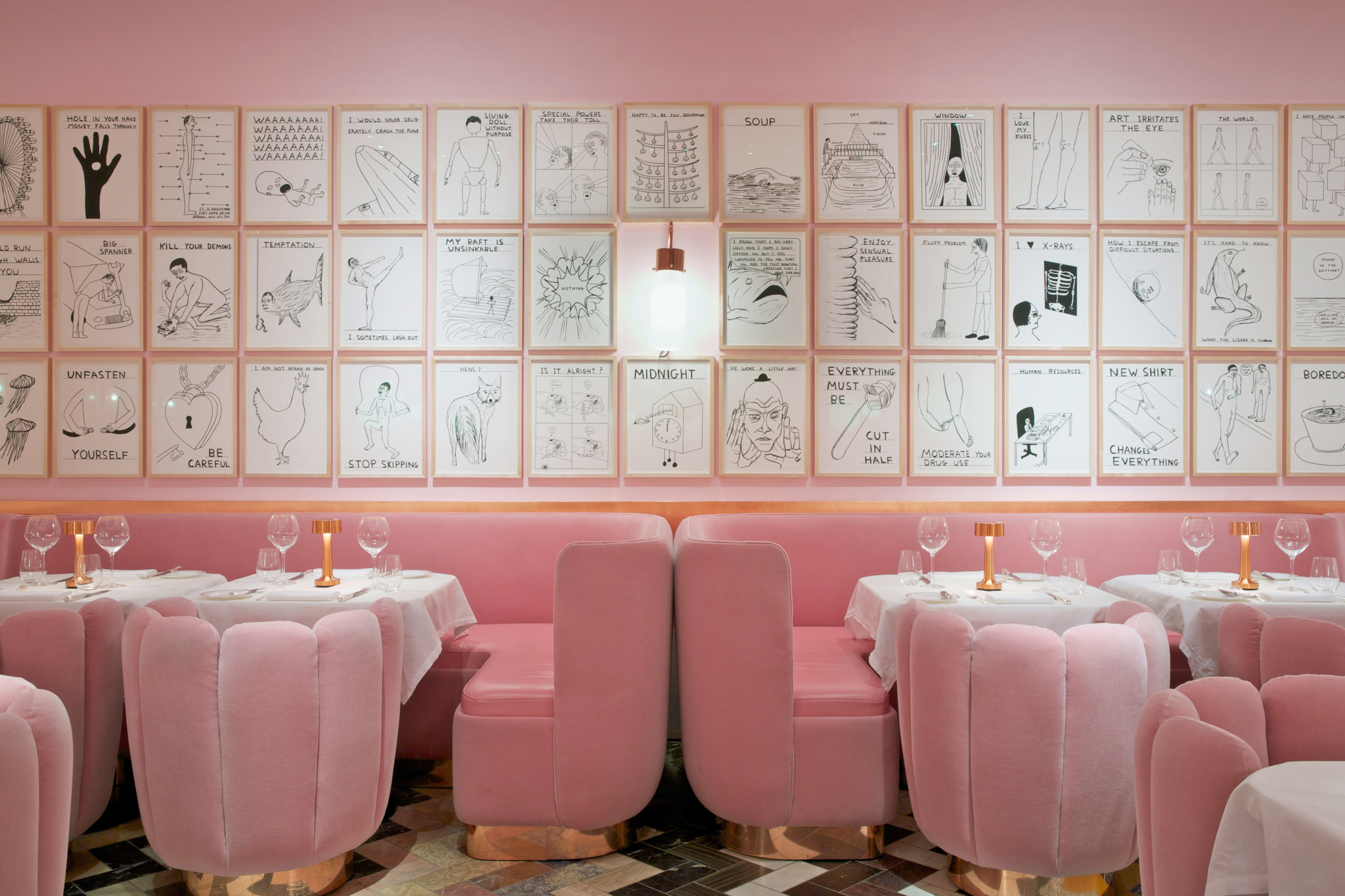 Eating and dining isn’t something that is always easy to plan when you have a full day of covering as much ground as possible, but during the holidays it’s really important to book reservations early! (Trust me, we found this out the hard way.) Below are a few places to consider when booking reservations during Christmas and New Years.

Sketch (9 Conduit St, Mayfair, London) – Before going to a new city, I always research fun restaurants to visit that are famous for reasons other than their menu. I first saw Sketch on Instagram and fell in love with their trendy pink furniture, chevron floors and characteristic artwork in their Gallery Room (pictured above). The black and white artwork by David Shrigley was actually replaced with new colored pieces by him at the beginning of this year. In addition to the Gallery Room, Sketch consists of five other restaurants/bars (the Lecture Room & Library, the Parlour, the Glade, and the East Bar). It’s a must-see for anyone who appreciates unique interiors, crazy bathrooms (check it out!) and a really good cup of English tea or cappucino.

Coppa Club (3, Three Quays Walk, Lower Thames St) – If you’ve seen any pictures of Coppa Club (chances are on Instagram), you’re probably aware of their furnished igloo’s you can dine in while overlooking Tower Bridge. Yes, an igloo! This is where I initially wanted to have Christmas Eve dinner until we made the mistake of not making reservations ahead of time and unfortunately were SOL. You need at least six people to book an igloo, or you can share with other people if you have a party less than six.

The Wellington (351 Strand, London) – There are so many cute and cozy pubs in England and each one has their own unique character. The Wellington is a cute pub we found behind Somerset House that had really good fish and chips.

The Ned (27 Poultry, London) – As I said earlier, we made the mistake of not making reservations ahead of time on Christmas Eve and were left calling places last minute, trying to get a reservation in anywhere we could. We happened to find The Ned online and they were able to squeeze us in to eat in their restaurant, Millie’s Lounge. The Ned is a 5 star hotel with eight restaurants/bars. We loved the live music, good food and fun atmosphere in Millies!

Harrods Food Halls (87-135 Brompton Rd, Knightsbridge, London ) – Whether you’re in the mood for a steakhouse, café, an ice cream parlor, or even an oyster bar, Harrods has it! During the holidays it’s best to go in the morning when they first open at 10AM because it’s absolutely packed and sort of chaos walking around in the afternoon.

The photo of Sketch was kindly provided by Sketch. 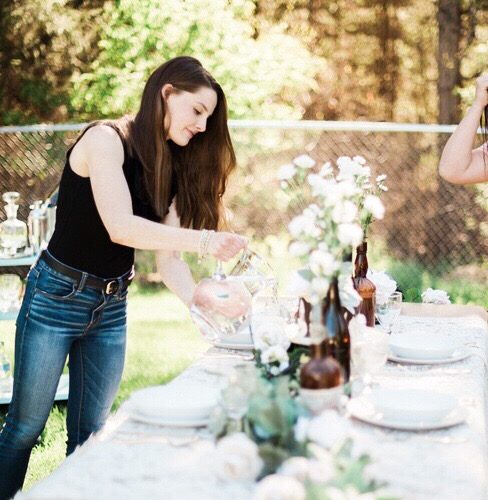 Hi there! I'm so glad you're here. I'm Maddie and I started These Northern Roots as a creative outlet to share all topics closest to my heart - recipes, entertainment ideas, special moments, occasional DIY projects, and life in Northern Michigan. I hope this little blog sparks inspiration during your visit and you return soon. XO

Get posts delivered to your inbox!

A little over a year ago, these two asked me to be

A great holiday weekend at home surrounded by the

I was so excited to take photos of this beautiful

So much fun celebrating Mr. and Mrs. Pizzimenti ye

This error message is only visible to WordPress admins


Error: API requests are being delayed for this account. New posts will not be retrieved. 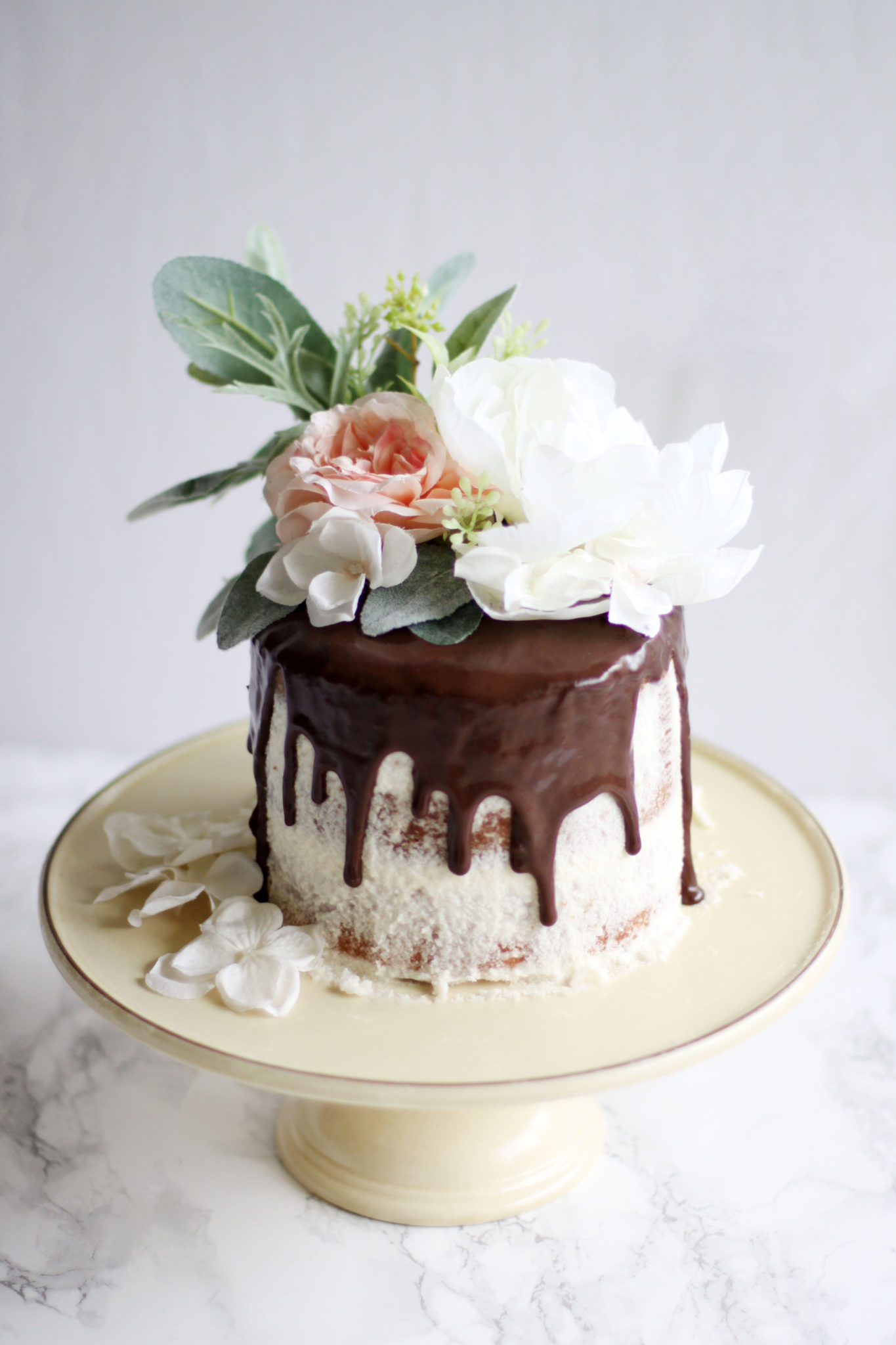 All images on These Northern Roots is my original copyrighted material unless stated otherwise. If you wish to use a photo of mine, please do so while appropriately crediting this blog and/or the original post.

A little over a year ago, these two asked me to be

A great holiday weekend at home surrounded by the

This error message is only visible to WordPress admins


Error: API requests are being delayed for this account. New posts will not be retrieved.